It's one of those dark beige days outside. As you've read from me multiple times over the years, in Indiana the time between snow and the relatively late spring is usually quite dreary. Actually, we do get snow off and on right into April with bleak weeks in between. There won't be any snow today, not with the temperature being 46 °. The North-East of the country got hit by another bad storm, but thankfully it has missed us. Still, I don't like the dreariness of low, slightly dripping clouds and a basically lifeless, brownish landscape either. Even in the city it appears that the colors of houses and signs have faded.

If I'm not careful, I'm going to be in a tunnel again. It's time to put together the new issue of the journal for ISCA, and I also have the proofs for In the Beginning God before me. I need to make sure I parcel out my time wisely. For the proofs, I've done my first go-round and discovered a number of places that need some kind of fixing. The editors needed to cut the number of words, which they did nicely by eliminating some of the more esoteric or repetitive passages. But I've found a number of places where I refer to those items later on, usually just as an aside, "Remember that . . . " So, those need to be fixed, either by eliminating them altogether or to revise them into statements of their own with a note directing the reader to any further discussions in the literature. Then I need to make the index.

While the authorities were starting to make plans against Jesus, he continued to carry on his ministry. If you've read the last entry, you might be surprised at how early in the gospels the decision to kill him comes up. As I've said before, borrowing from Martin Kähler, what we have here is a "passion narrative with a long introduction." Everything points towards the cross, right from the beginning.

Some commentators think that the gospel writer deliberately inserted a contrast here, moving from the schemes of the Pharisees to the disciples and the crowd following Jesus. I'm more inclined to think that in this case it did not take any literary device to establish the contrast because it was just there naturally. Jesus spent an entire night praying and then designated some of his disciples as his "Special Twelve." Jesus called them his "apostles." 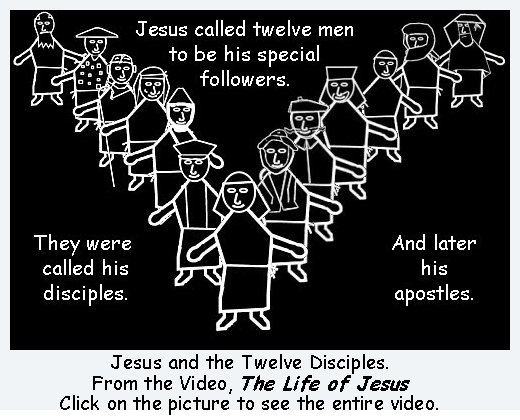 The word "apostle" can have several meanings, and probably does so within the New Testament itself. Its root appears to be based on the idea of something "being sent," where it can refer to an object or written document as easily as a person. Luke says that Jesus gave to the Twelve the moniker "apostles." In the parallel passage (Mark 3:14), we read in the NASB "And He appointed twelve, so that they would be with Him and that He could send them out to preach." The meaning is essentially the same, namely "being sent." Nevertheless, some scribes added the same phrase we find in Luke to the Markan version (see my discussion on textual criticism on Dec. 8 and Dec. 9 of last year), and some English versions carry both. E.g., our HCSB says in Mark, "He also appointed 12—He also named them apostles —to be with Him, to send them out to preach." Thus, technically such renderings are redundant. But the word "apostle" took on a life of its own in early Christian circles, as documented already in the New Testament. In 1 Corinthians 12:28 Paul appears to list "apostleship" among the different gifts God distributes over the entire church, whereas Luke seems to use the term "apostle" in a more special way, probably based on the new meaning it had acquired among the Christians by the time when he wrote his gospel. This usage comes out very clearly in Acts 1:13-21, where Peter laments the fact that only 11 out of the 12 apostles remained (Judas having resigned from office), and proposes that a twelfth one to be added to re-complete the number. The term "apostle" had apparently taken on the added connotation of leadership.

Without intending any particular profundity or new insights, here are the names that appear in the four lists of the twelve apostles and a few factoids. They are found at Luke 6:14-16; Mt. 10:2-4; Mk. 3:16-19, and Acts 1:13. The lists are surprisingly uniform. The 12 men are grouped in three sets of four, each of which has the same four disciples, and each of which is headed by the same three individuals: Simon Peter, Philip, and James the son of Alphaeus respectively.

Some of these disciples are well-known to us. Others we'd have a hard time remembering unless we took the trouble deliberately to memorize their names (which isn't that bad of an idea, actually). Excepting Iscariot, we should certainly not make any kind of judgment concerning the effect of their various ministries based on how well known they are to us. What the Bible records is, like any other writing, to a certain extent selective, and, just because we don't know much about, say, Thaddaeus, does not mean that he did not carry out mighty works in the name of the Lord.