Examples of the occurrence of the Fibonacci series in nature abound, and so do their descriptions. Therefore, apart from referring you to some websites and simply mentioning a few examples, I will not focus on that aspect. It’s been done often and it’s been done well. It’s the mathematical relationships that I’m trying to clarify.

“John” (no further name seems to be available) wrote an interesting article for the website, Let’s Reason Together, “It’s All in the Numbers.” He begins with the confession:

I’m taking what “John” said there as a somewhat humorous expression of his humility. Part of what I’m trying to show here is that, even though working with numbers may require systematic step by step analysis, doing so properly also needs “right-brain” creativity. Furthermore, its laboriousness is not any more tedious than what I see many serious artists practice on a daily basis. Producing a work of beauty may necessitate long hours of intense labor. Take the Taj Mahal, for instance … Furthermore, if one wants to write on a phenomenon in math, one should ideally be on good terms with the subject, and I’m sure that most people would agree with that sentiment. 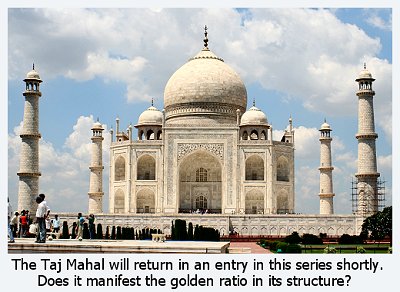 “John’s” article mentions four areas of nature in which the Fibonacci numbers play an organizing role:​

1. the sections of pine cones and pineapples, which are arranged in a Fibonacci spiral;
2. the spiral arrangement of seeds within a sunflower;
3. the genealogical pattern of the male population within a beehive;
4. the relationship of the phalanges and metacarpal bones of the human hand.

We can add other examples, such as

5. the number of petals in a rose.

These are realities that Christians can point to and say that there must have been some intelligence involved in constituting the world in this marvelous way. Sure, we can find reasons why these arrangements are in the pattern of the Fibonacci series insofar as they contribute to the well-being of a plant, an animal, a geological formation, etc., but that observation only strengthens the argument that these examples are not random aesthetic or mechanical coincidences. If they serve a purpose, then there’s all the more reason to believe in an intelligent Creator behind the construction of the universe.

Sadly, once again I need to recite my litany about wishing that some Christian apologists were a little more careful when they assemble their evidence on behalf of God and the Bible. For example, the article by Fred Willson of the Institute for Creation Research, “Shapes, Numbers, Patterns, and the Divine Proportion in God’s Creation” [Impact: Vital Articles on Science/Creation,” #354 (December, 2002)], quite uncritically compiles what appears to be every claim for the golden ratio ever made, including some that are dubious at best, thereby undermining the credibility of what could have been a good case. E.g., his very first example consists of a correct description of the chambered nautilus, which he then labels, incorrectly, as displaying the “golden spiral.” (Note my earlier point that the mollusk in question does manifest a logarithmic spiral, but it does not fit the golden ratio as usually understood. At the time I just referred to this error in general; I had not yet seen Willson’s article. )

This procedure is indeed lame, predictiable, and extremely slim on creativity. The matter of far greater interest is, of course, that the further we go, the closer the ratio of one number to its predecessor converges to phi. I realize that I have heretofore spoken of this relationship between Fibonacci and phi in a somewhat deprecatory manner, but, since you now realize that phi is not directly derived from the Fibonacci series, I can go back and endow the idea of convergence with the respect that it actually deserves. By “convergence” we refer to the properties of an ongoing series of numbbers whose numerical value comes increasingly closer to a particular number, ultimately coming so close to that number that the difference appears trivial.

John Derbyshire [Prime Obsession (Washington, DC: Joseph Henry Press, 2003)] presents us with a good illustration of convergence by contrasting it with its opposite result, called divergence. Most of this entry from this point on summarizes and maybe clarifies (if necessary) Derbyshire’s exposition. “Divergence” means that the value of the series keeps growing and, thus, eventually could be said to be infinity (∞).  He illustrates divergence by using the so-called harmonic series, which consists of the reciprocals of regular counting numbers (those that inhabit ℤ).

For a moment there you might think that, similar to the harmonic series, this one will also extend to infinity, but it doesn’t work out that way. To be sure, the number does keep growing; however, the rate of growth declines rapidly so that, as you go further along the best you can get is near-identity with a finite number. Let’s see what happens when we add it up this far:

That’s pretty close to 2, and the further we go, the closer we will get, though we’ll never truly reach it. (Is anyone else reminded of the sizes of wrenches and sockets in an American-style set of tools?) We can say that the formula approaches 2, and that’s good enough for many purposes.

Similarly, the ongoing ratio of the Fibonacci series approaches phi.

and that, too, is good enough for many purposes.

One such purpose is to help us determine the “nth” Fibonacci number when it’s a long way up the chain, say the 95th, without having to memorize the entire set of Fibonacci numbers or go through the tedious and (*cough*) laborious (*cough*) method of generating the lengthy chain of 95 links. But the clock, my energy, and your patience all lead me to realize that I better save that excitement for the next entry.

(Also, this is the first time that I’ve availed myself of MS-Word’s equation feature, which is pretty nifty. However, I wonder to what extent these formulas are going to translate into html. If I thought that thumb crossing had any value, I’d ask you to figure out how exactly one crosses one’s thumbs and then maintain your digits in that position.  -- Alas, it didn't work, so I needed to convert the equations to pictures for now.)