Despite the many unfounded conjectures that make for best-selling novels, there is no good reason to believe that Jesus was ever married, not even to Mary Magdalene.  Furthermore, neither is there good reason to believe that, if he had been, that this information would have been withheld. The Hellenistic-inspired emphasis on celibacy and asceticism was not a part of Jesus' world in 1st-century Judaism.

Neither, as I have hinted at previously, would "asceticism" be exactly the mot juste to describe the life of Krishna. In contrast to Jesus not having any wife, Krishna had 1,6008 of them, not that this amount sufficed for his needs or abilities. Eight of these wives were his "main" ones. Just as Rama's wife Sita was an incarnation  of Vishnu's shakti (consort), Lakshmi, two of Krishna's wives fit into that category as well. And not sequentially. Sorry; that's confusing again. Let me explain. 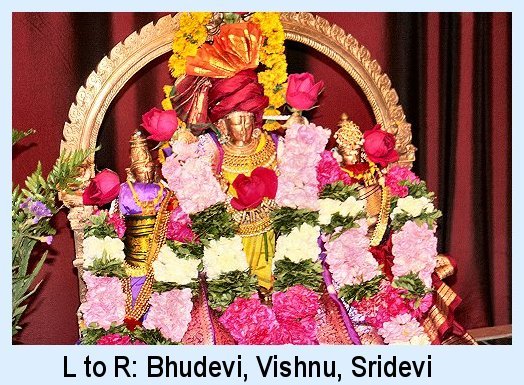 None of the gods or goddesses of Hinduism are ever confined to just one form. Frequently they not only have many different names, but different personalities and appearances. For example, in the formation on the left, Vishnu is often called Venkateshvara, the "Lord of this Age." In that depiction he is flanked by two forms of Lakshmi. On his right is Sridevi, the beautiful goddess, by far the more common representation of Lakshmi. On Vishnu's left is Bhudevi, the earth goddess, whom we met earlier as the deity who petitioned Vishnu to incarnate himself to rid the world of Kamsa. Now we get to know her as another deity form of Lakshmi as well.

[By "deity-form" I mean the form that a god may take on while remaining a god, as opposed to an "avatar-form" when the god appears as a human being or animal. Ditto for goddessess.]

So, Bhudevi and Sridevi, the two forms of Lakshmi became avatars as well. Their names were Sathyabama and Rukmini, and both of them became married to Krishna. There are stories for both Sathyabama and Rukmini, in which mutual love and devotion between each of the women and Krishna is in evidence, and if we want to remain faithful to the myth (as we should) we should not question that Krishna loved his other six main wives as well. The point is that Krishna had so much love to spread around that eight wives simply were not enough for him.

Enter the gopis, the milk maids. During the time of Rama they had been enamored with this previous avatar, but Rama had to remain faithful to Sita, or the whole story of the Ramayana would have been spoiled. However, it was promised to them that they could indulge themselves to their uttermost in a future incarnation with another avatar, and so now they did. Not that Krishna minded.

The 16,000 additional wives to which I referred earlier are not necessarily all gopis, or milkmaids. Depending on the version of the story, they had been stolen and  imprisoned by either one or several asuras (demons), whom Krishna subsequently conquered. So now, the young, beautiful women were free, but freedom meant little to them.

If I may go back to Rama and Sita once more, after Rama had liberated his wife Sita from the evil demon king Ravana, there was a big question mark looming as to whether their marriage could continue, because, if Ravana had taken advantage of Sita, she would now be defiled, and Rama could not be married to an impure wife. Sita demonstrated her purity by willingly letting herself be engulfed in a large bonfire and, after a few moments, coming back out totally unscathed.

However, there were not going to be 16,000 fires testing the purity of 16,000 maidens. For that matter, at least some of them may have been defiled. So, free or not, none of these women were going to have decent lives because they would not be able to marry. But this situation presented no obstacle for Krishna. He married all of them. At once. All 16,000 of them. In one night. Again, there are variation on the story, but the most beautiful one also makes for beautiful pictorial representations. It symbolizes Krishna's union with each of these women as a dance, for which he multiplied himself 16,000 times so that he would be there as dancing partner with each of the 16,000 women simultaneously. In the picture, which is only a small part of a much larger mural, each blue-colored figure represents Krishna.

Needless to say, Radha was incredibly jealous of all of these women, gopis, goddesses, and other objects of Krishna's affection. However, Krishna assured her that no love could possibly exceed the love that he had for her. --- Oh, did I forget to tell you about another wife of Krishna's, this one called Radha? ---Actually, no. Radha was not married to Krishna. She had another man as a husband, just as Krishna had many wives. However, theirs was a really true and pure form of love. If one takes a symbolic, "transcendental" approach to this phase of the myth, one is supposed to see that the love between Radha and Krishna represents the unlimited love that the god has for a human person, a love that overcomes all obstacles and boundaries, whether physical or social. In no way, is the relationship between Radha and Krishna supposed to be emulated by human beings. Just because a god can do something, doesn't mean that it's okay for a human being to do it. Of course, saying this is an interpretation that is not directly attached to the myth, but it would be a very common commentary by someone relating it today.

Nevertheless,  it's still adultery. It's wrong. Even without taking recourse to a formal set of ethical rules or religious commandments, Krishna's entire life contradicts some of our most basic instincts of morality. It's all very well to say that Krishna was not under obligation to live by the same laws as we do, and we could just relegate him to the category of yet one more alleged deity who is, after all only human. (That's a slight adaptation of a statement made by Aristotle at one time in a satirical commentary on the Greek gods.) What makes this mythology so astounding is that, regardless of his life, people worship him and look to him for moral and religious guidance.

We'll leave it there for the moment. Mr. Das, on the web site we've been using as our foil tells us that both Jesus and Krishna taught peace and love. That'll be our topic next time.