Win and June are out of town again, pursuing certain obligations. Additionally, I've been too occupied with the article on Akhenaten and other matters to gather chips to post on the blog. Did I really say last Wednesday or so that I was putting together the last sections of the article? I guess a little optimism is a good way to keep yourself going. It turned out to be late Sunday night (or really 2 a.m. Monday morning), that I finally hit the "send" button, so that it would find its way to Logos. On Monday morning I had some other matters to clear up, and, then, once again, we loaded up the Dodge Dakota to pursue some tasks of a different kind of importance. As I said, it wouldn't be right for me to reproduce the article or its specific content for you here, but there still are plenty of chips off the workbench that I can share with you.

Before proceeding, I must make a couple of important points, lest you be misled. As I am frolicking along here giving you my interpretations of the eighteenth dynasty of Egypt and stressing how it relates to the Exodus, please do not fall into the trap of thinking that this is easy stuff to master. There are many relevant issues that I'm neither raising nor answering here because this entry is not intended to be a deeply technical discussion. But If you rely on what I am writing here alone, you will soon find yourself with a whole new set of questions for which I believe I know the answers, but can't get into without risking a severe shrinkage in readership. I fear that nobody would read the blog if I crammed it full of alleged Egyptianisms in the Pentateuch, interpretations of artifacts, etc., items one can and should study from existing books. I already mentioned that my interest in ancient Egypt began with receiving a copy of C. W. Ceram's Götter, Gräber und Gelehrte (Gods, Graves and Scholars) as a Christmas present, and, though I did not become an Egyptologist, I have maintained a serious interest in the subject. (I know, someone might point out to me that I have maintained a serious interest in perhaps too many different subjects, and--for good or ill--they could be be right.) When I took the course on Old Testament Introduction from Gleason L. Archer, he had us memorize even the tiniest minutia shedding light on the date of the writing of the Pentateuch and of the Exodus, e.g. words in the original biblical text that are consistent with an Egyptian origin. What are the clear results and liabilities of Nelson Glueck's archaeological survey of the East Bank of the Jordan? Etc. I am mentioning these things because I hate to think that anyone would simply use what I have written here and believe that they are now equipped to tackle the world of the history of Egypt. I believe that every word I'm writing is true or the most plausible option, but in many cases it's hard-won territory, which I'm giving you for free without the struggle.

Which, of course, brings me to my constant lament: Where are the successors to, say, Archer and J. B. Payne, evangelical scholars who held to the full sense of inerrancy, and who were capable of engagement with the source material on the primary level? (Actually, I trust that we all realize that "full inerrancy" is a redundancy, and that "partial inerrancy" is incoherent; a relativized universal is no longer a universal, and "inerrancy" expresses a universal property of the Bible). I have stated aggravatingly often over the last few years that I believe that evangelical seminaries need to seriously consider adding Sanskrit to their curriculum for, loosely put, purposes of apologetics. But I have always said at the same time that I would not want one hour less of ancient languages offered or taken. Maybe more. I would love to institute an ideal seminary curriculum; it would look very different from the common compromises--and few people would take it.

Anyway, let me just mention by title Gleason Archer's Survey of Old Testament Introduction. For his course, all one had to do was to memorize the book and apply its content to an article written from a liberal point of view---hah! Not so hard if you had a photographic memory. Also, while we're on the Amarana Tablets, if you've never looked through James B. Pritchard's Ancient Near Eastern Text (ANET) or his abridged Ancient Near East: An Anthology in Texts and Pictures(ANETA), you may be in for a surpirse on seeing how much of Old Testament history is mirrored in contemporary writings by its pagan neighbors. The Armarna tablest are found in ANET, as well as excerpts in ANETA. A different translation compiled by William Moran is found in the Logos collection, originally published by Johns Hopkins Press in 1992. I'm sure there are many other good places to start. Mine lie here.

So, I left off last time by mentioning the snitty attitude that Akhenaten manifested toward his "brother" kings. The Canaanite princelings (some translations call them "mayors; the OT calls them "kings"--I would call them "fawning autocrats on insecure thrones"--were by and large not asking for gold from the pharaohs; they could count on not getting any. They begged in the most embarrassing terms for the Pharaoh's military assistance. The Hittites were spreading their elbows into Syria and--as mentioned above--eventually wiped out Mittani. The Canaanites took advantage of any possible opportunity to gain power over their colleagues, forming and breaking alliances to suit their needs. The following is copied and pasted from my present totally ad hoc collection on this topic, more specifically entitled, The Chronology of Judges, which the present series will replace: 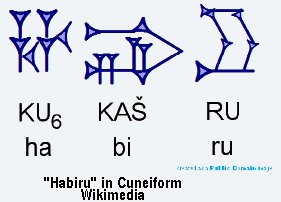 Among these letters we find an appeal from Shuwardata, prince of the greater Hebron metropolitan area to Akhenaten, appealing for military help against the Habiru. He claimed to have "smitten" the Habirus' leader, but this seems to have been a fairly dubious claim since he was still continuing to  lose territory to the Habiru in the process, and he was going on to fight the Chief of the Habiru. And, by the way, again the idea of a single "Chief of the 'Apiru" does not fit in with the picture of Habiru as disorganized marauders. Here is a part of this letter.

In another letter, in which 'Abdu-Heba complained about being let down by his neighbors, he mentioned the town of Bethlehem:

But now even a town of the land of Jerusalem, Bit- Lahmi by name, a town belonging to the king, has gone over to the side of the people of Keilah. Let my king hearken to 'Abdu-Heba, thy servant, and let him send archers to recover the royal land for the king! But if there are no archers, the land of the king will pass over to the 'Apiru people. . . . So let my king take care of [his] land! (Pritchard, 274)

Now, let us remind ourselves that the term "Habiru" initially covered unwanted nomadic people of various ethnic backgrounds, not just the Israelites. However, it seems to me pretty clear that the term became increasingly associated with those, whose name has come down to us as "the Hebrews." These were a rather unified group, an army rather than just a few nomadic tribes, and they came to conquer and stay, all of which is out of keeping with the ex post facto text book descriptions of Habiru by liberal scholars, many of whom have switched from the theory of a late exodus to denying the exodus altogether. I don't think they would have done so if the evidence did not point so clearly into the direction of underscoring the reliability of the biblical record. Thus, a part of what we are seeing in these tablets is the conquest, as recorded in Joshua and Judges, from the point of view of some of the Canaanites. Incredible? Taking out of context the words of Mut-ba'lu, prince of Pella, in a letter to viceroy Yanhamu:
Indeed, ask Ben-ilima, ask Taduwa, ask Yashuya!
(Pritchard, 267)
A major hindrance in some parts of Near Eastern Studies, including Egyptology, is the way in which debatable assumptions have metamorphosed into axioms. There is nothing new in that observation, of course, and I'll try not to flog that poor equine too badly. Still, you may find it interesting to see specifically how such assumption have manifest themselves in this area of study on Egypt and the Bible.

Pictures and navigational aids later .... And the series must continue.