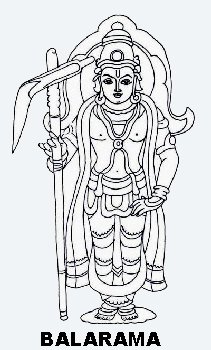 Before finding out whether Krishna survived beyond the day of his birth, let me quickly throw out a few comments on the person of Balarama, Krishna's older brother in this version of the story. I mentioned specifically that he was supposed to be an incarnation of Lakshman, Rama's brother. However, there are other interpretations as well, and I'm not going to say that they are necessarily mutually exclusive, but they certainly can get confusing. 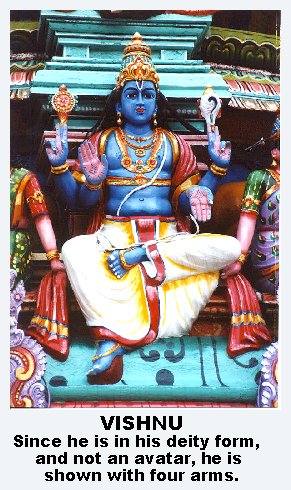 Now let us recall that Balarama, though genetically the son of Vasudeva and Devaki, had been implanted by Vishnu himself into the womb of Vasudeva's other wife, Rohini, and had been spared death. He was still a little toddler when Krishna was born.

So, Devaki gave birth to Krishna at midnight. Remember that Vasudeva was imprisoned, so that the evil Kamsa could kill all of Devaki's children. But arrangements had been made. At the same time as Krishna had been conceived, a woman by the name of Yasoda, the wife of Nanda, a cowherd, also became pregnant. She gave birth to her infant, a girl named Yogamaya (or Yoganidra), at the same time as Devaki gave birth to Krishna, placed the baby beside her and fell asleep. Now Vasudeva went to exchange children. He took tiny little Krishna and found his way clear out of the prison because the door was open and the guards were sound asleep. Some versions of the story say that the aforementioned serpent, Shesha, helped Vasudeva find his way; others say that he took Balarama along that very night, in which case, assuming that Balarama was indwelt by Shesha, the serpent came along in that guise. Nanda and Yasoda lived on the other side of the Yamuna river, which happened to be flooding at the time. (This is the river next to which the Taj Mahal was built, which has nothing whatsoever to do with this story.) The waters receded so that Vasudeva could cross over safely. Without anyone noticing, he crept into Nanda's house, located Yasoda, laid down baby Krishna next to her, and absconded with her baby. As you will see in a moment, she got the better deal. 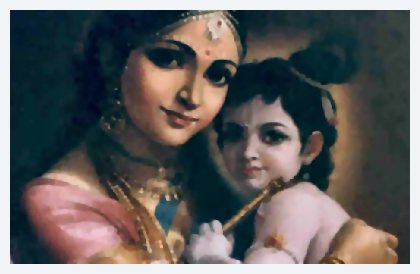 No sooner had Vasudeva returned to his home in prison, when the guards awakened and heard the cry of a baby. They immediately notified Kamsa of the birth of Devaki's eighth child, the one that was supposed to kill him. He rushed into Devaki's room and picked up the infant and was about to smash the little girl on a stone. However, he never got that far. The baby sudden immaterialized in his hands, started to ascend to heaven, and pronounced something along the line of, "You stupid idiot. I'm not the one you're looking for. I'm Yogamaya, the Great Illusion. The child that you're after has already been born and is safe." With those unfriendly words she disappeared. 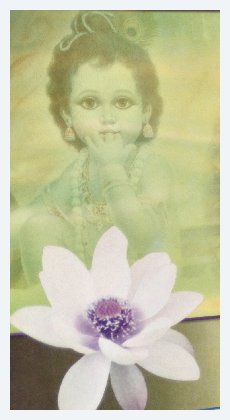 Kamsa was highly annoyed. He did keep his word and set Vasudeva and his household free. If he hadn't done so before, then now Vasudeva took Balarama to Nanda and Yasoda. He explained matters to them, and they were happy to raise both Krishna and Balarama. But Kamsa needed to find this dangerous baby and kill it before it killed him. Since, he had no idea where this child might be, he set up a method intended to eradicate his kingdom of all newborn infants.  He hired a demonic wet-nurse named Putana. Every infant was supposed to suck from her breasts, which dispensed an instantly fatal fluid. Eventually she came around to Nanda and Yasoda, and commanded them to have little Krishna partake of this mandatory suckling. Little Krishna actually happily complied. He put his mouth to one of her breasts and sucked. And sucked and sucked. He sucked the life right out of her. By the time he was done, he was fine, but the evil woman was dead. Still, this event allowed Kamsa to identify Krishna as the eighth of Devaki's children, the one who was destined to kill him. So, he commissioned several demons to come after him in various ways, but in each case, Krishna was able to kill the demon with his divine power. He now began his childhood among the cowherds and milkmaids who were living in the area surrounding his new home.

In the meantime, why don't you go back to the list of supposed resemblances between Christ and Krishna that I posted last time and see how well it stands up, once you look at the details.  Remember, the conclusion we were supposed to reach was that they were indeed one and the same person.  Are we getting there?